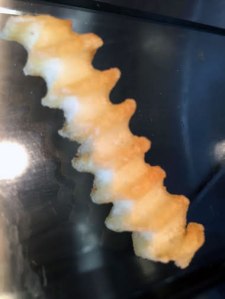 Crinkle cut fries are just so, so hot right now. No, literally. HOT. RIGHT NOW. As in, that sexy potato with that ultra-hip, modern crinkle cut look, that summer time brat and beer bathing suit, that formidable fry, just came out of a nice long soak in the day spa we call the fryer. Piping. Hot. Tell me you don’t want that.

FRIES ARE FUCKING SEXY. There. I said it. I spit it out. Fries are the ultimate temptation of the potato world we live in. Oh just one? YEAH FUCKING RIGHT BUDDY. You’re coming back again and again and again, you sick pervert you.  I see that look in your eye, that LONGING. You’re thinking about that lonely little crinkle cut right now, aren’t you? You’d eat it whole without even taking the time to chew. Admit it. Now imagine if that was actually a good photo. You’re going to need some more napkins, aren’t you?

Hey, I’m not judging! Really, I’m not! It’s a crinkle cut fry… What man or woman alive has a chance against it? Oh, you’re on a diet, are you? Oh, no more starches, huh? Oh, watching your figure, eh? WELL HOW ABOUT YOU JUST TAKE A DEEP WHIFF OF THIS SHIT. Yeah. Thought so. Go ahead and just drop your weeping diet off at the in-laws’. It’s not your fucking problem anymore.

There’s a reason fries get the all the press, the fame, the commercial endorsements. SEX. APPEAL. Boy oh boy does sex sell. You know it, too. You’re getting hungry right now. You can’t help it. You’re an animal. You want to know a secret? That crinkle cut potato right there, that Freudian-phallic fry, that sizzling sexy starch, it wants you too. And crinkle cut fries always get what they want.