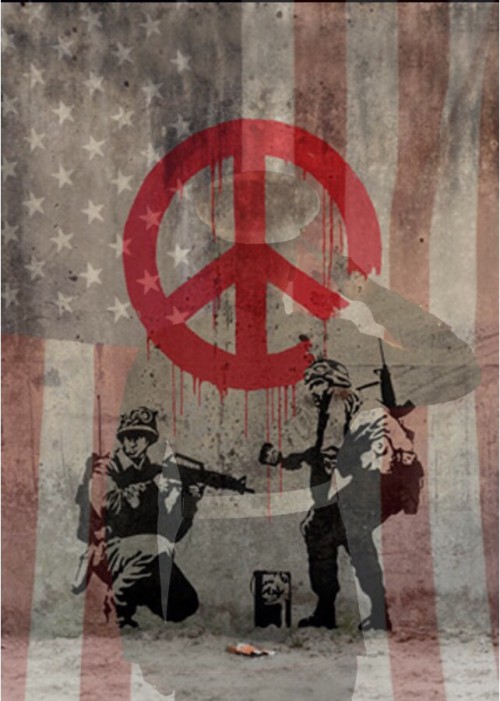 For a lot of young Americans, Veterans Day, Memorial Day, D-Day, and maybe July 4th is when they’re mostly made aware of what the armed forces do for love of country and why that’s dope. Perhaps, that’s why this short yak caught some wind on the University of Iowa’s Yik Yak (THE most American Yik Yaks of them all, I might add. Go Hawks! Stanzi 3:16 😉 )

While I can imagine the perspective the writer was seeing such a protest from, I can’t imagine a MORE perfect time to protest the influence the military industrial complex has on policy making that takes Vets to unnecessary wars, then dumps them back on civil society only to deny them basic recovery services. If the protest is about avoiding unnecessary, costly conflicts, then is there really a better way to honor Veterans on Veterans Day?

Today is Veterans Day, a day to honor American military veterans, or everyone who has served in the United States Armed Forces. This is not to be confused with Memorial Day, a day to honor those who have fallen in the line of duty to the United States Armed Forces.  Both spark a foray of patriotic displays and salutes, ever more amplified by today’s social media and trending topics… for better or worse.  Living in a college town like Iowa City – where the college institution is fairly considered liberal leaning, surrounded by a conservative state, is to live in the eye of an ideological storm.

*Note for our international readers: YES… even in this holiday that’s supposed to bring some healing and unity, we find a way to divide each other here.

Veterans come back home after serving duty. Often they leave something behind during duty, a comrade’s last moments, a mind capable of coping with everyday stress in a healthy manner, a piece of mind about their fellow man even away from war. Some wish to go back, when they find no purpose in civilian life after that experience. Some come back and suffer from Post Traumatic Stress Disorder, one of many psychological disorders associated with a Veteran’s identity resulting in a myriad of consequences in relating to their communities, their families, and their friends.

Some come back carried by their comrades who hand their families a crispy folded American flag Those who are fallen, are forever indebted by their country. They must be paid in our efforts to strive to be a more perfect society worthy of their ultimate sacrifice, a more perfect society that would only ask of such a sacrifice as an absolute last resort to the alternative of influences available at America’s disposal.

If you’re a senior (23) in college right now, you were just hitting puberty when this image was taken:

That was a President Bush announcing the “end of major combat operations in Iraq” – in what has turned out to be one of the three longest wars in American history (besides Vietnam – 17, and Afghanistan – 14). For too many, that image is seared in the back of our minds when thinking about our Veterans today. Political Science mastermind Ian Bremmer has said:

That overreaction included a potent mix of fear of an unknown new threat, hastily drawn intelligence conclusions – and an altogether far too trigger happy leadership that decided removing Saddam Hussein from power was more valuable than tracking down Bin Laden and more than 3,000 of our Veteran’s lives was a price worth the gamble. This is the context in which this simple tweet/yak falls:

You can honor a soldier's sacrifice, love freedom, and still be against unnecessary war. The two are not mutually exclusive. #VeteransDay

When thinking of America’s most valiant and honorable hours in war, what images come to mind for you? It might be this guy:

General Washington and his army were at war to fight against a VERY REAL oppressive imperialism of the then British empire. If that’s not what comes to mind, maybe it’s another taller, skinnier guy about a century later:

Lincoln ordered cousin to fight cousin in what is still the bloodiest war in American history, as every fallen veteran was American for that civil war. Like Washington, the enemy danger was very real – it was to stop the spread of a cancer eating away at the very core of America’s bones and fiber.{Just to be clear, we’re talkin about Slavery here… or “states’ rights”… to OWN SLAVES}.

Seeing as history books in some school districts have started skewing those facts, maybe the one image we can all look at with a similar lens is this 3rd Mt. Rushmore head:

That’s Russia’s Stalin, America’s Roosevelt, and Britain’s Churchill teaming up to send future Veterans on a mission all their citizens KNEW was just, hard, and very necessary.

Whatever image comes to mind of these honorable, great moments in US history, we can all agree that we don’t want to recreate them unless we absolutely, positively have to! War, even when just, is still terrible.

Flying your flag high, and chest bumping to America’s greatness is easy. It’s much easier than war and its consequences – especially on Veterans! It requires nothing more than patriotic feeling, and can be done while avoiding loss of life. But does that red, white, and blue salute to the troops actually accomplish anything? Does celebrating the past do anything to prevent the future? Isn’t protesting a way to, you know, actually help? To stop future rushed military action? To prevent massive loss? To preserve more American Vets? Protesting isn’t a sign of disrespect to the Veterans of America. Protesting war is a sign that we value their lives this Veterans Day.